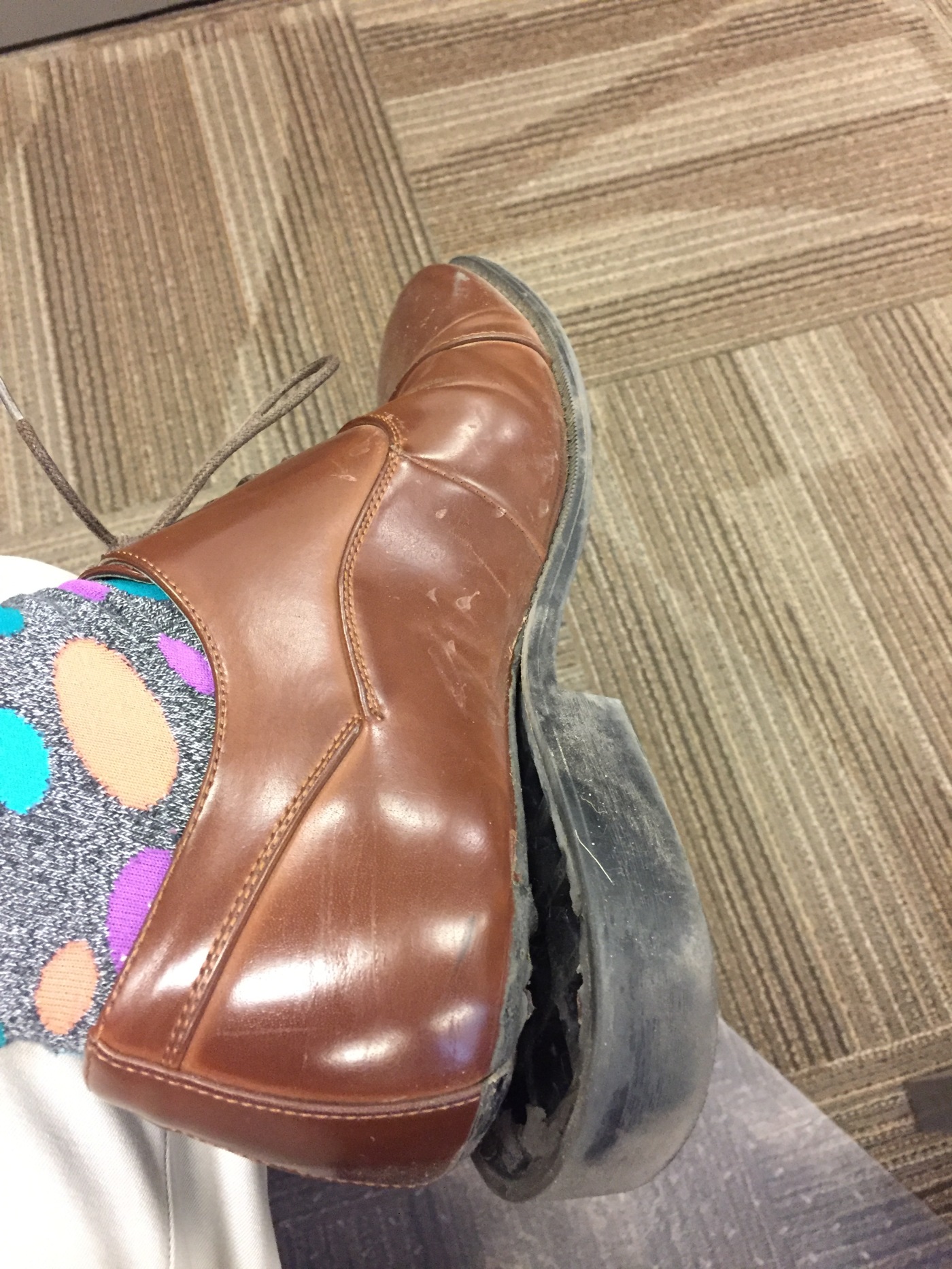 I walked past a young man who was standing on the sidewalk, waiting to be picked up by a friend or an Uber or something. I am guessing that’s what he was doing, anyway. He was just standing there off to one side on the sidewalk, bag on the ground next to him, with a phone up to his ear. As I passed, I had a couple thoughts.

I considered these things for a few steps after passing him, mind ready to float on to the next flight of fancy… or even just any flight of fancy. After a few steps, however, I was interrupted by a flapping sound, though it didn’t take me by surprise.

The bottom of my shoe hangs loose by whatever glue or stitching remains, causing the heel to dangle loosely, drawing unwarranted attention to itself with each step. They are very nice shoes, definitely not your typical tennis or skater shoe. Brown leather, solid black soles, the perfect shoe for incessant office meetings and perhaps a good church service. I, however, have a bad habit of stepping on the heels of my shoes as I pry my toes loose, eventually causing such detachments.

Then it dawned on me… What must he think of me now? There is no doubt that the THWACK of my heels was, at the very least, distracting if not entirely disruptive to a phone conversation.

My guess is that my initial presentation to him suggested a young man early in his career, dressing for the job in clothing, yet face suggesting he’d rather be doing anything else. Perhaps trapped by the will of his father or necessity of a family that simply needed him to pay the bills. Scuffed brown leather shoes, slightly wrinkles pants and shirt – this is not a man of passion.

And then, for the secondary assessment: Clearly not a man of passion when a simple spot of gorilla glue or trip to the shoe fixers would solve an issue that is most absurdly present yet overlooked because of the busy mind mulling over whatever it is that displeases him so much that he does nothing but stare at the ground. Perhaps not making as much as he had been promised when he was first offered the job. Perhaps whatever is in his mind so greatly trumps his shoe problem that he’s willing to suffer the cacophony and save his money for a more worthy cause. Or perhaps he is simply upset because of his broken shoe and inability to presently deal with it.

Now, here is my assessment of myself: I am a man of whimsical dreams and great passion. I do what I need to so that I can chase at least ten dreams at a time. While they do nothing but occupy my mind all the day long, they are not so important as to make me unsociable. I am simply conditioned by the culture around me after many failed attempts to strike up conversations with strangers that I no longer go out of my way to say hello. If I had more luck or thought I’d have more luck getting a response from my greeting, I might try it more often. I am a young man early in my career, but the only person trapping me here is my past self who once aimed to appease others and so took on debt that now needs to be paid off, and my future self who would someday like to be a reliable husband and father with a wife who can choose to work if she likes, but it won’t be necessary, and who would like to have the luxury of travelling the world before I am deep into my 30’s or 40’s and putting kids through school. I am not happy in my present job but I suffer it in hopes for the future.

And as for my shoes: One part of me dearly enjoys looking dapper and would love to get my shoes fixed. The other part of me thinks the symbolism is too much to pass up. As both a child who has been defined by broken glasses, ripped jeans, and torn up shoes, and a man who is only in a career type job by necessity, kicking and screaming into adulthood, and only just upholding his responsibilities, what better designator than a shoe with a broken sole?

Now it just makes me laugh.

Sharing my story through a science fiction blog.

"I saw the Angel in the marble, and carved until I set him free"